[ This blog post is collaboratively written by Evan and Memming ]
The Scalable Models workshop was a remarkable success! It attracted a huge crowd from the wee morning hours till the 7:30 pm close of the day. We attracted so much attention that we had to relocate from our original (tiny) allotted room (Superior A) to a (huge) lobby area (Golden Cliff). The talks offered both philosophical and methodological perspectives, reflecting diverse viewpoints on and approaches to high-dimensional neural data. Many of the discussions continued the next day in our sister workshop. Here we summarize each talk: 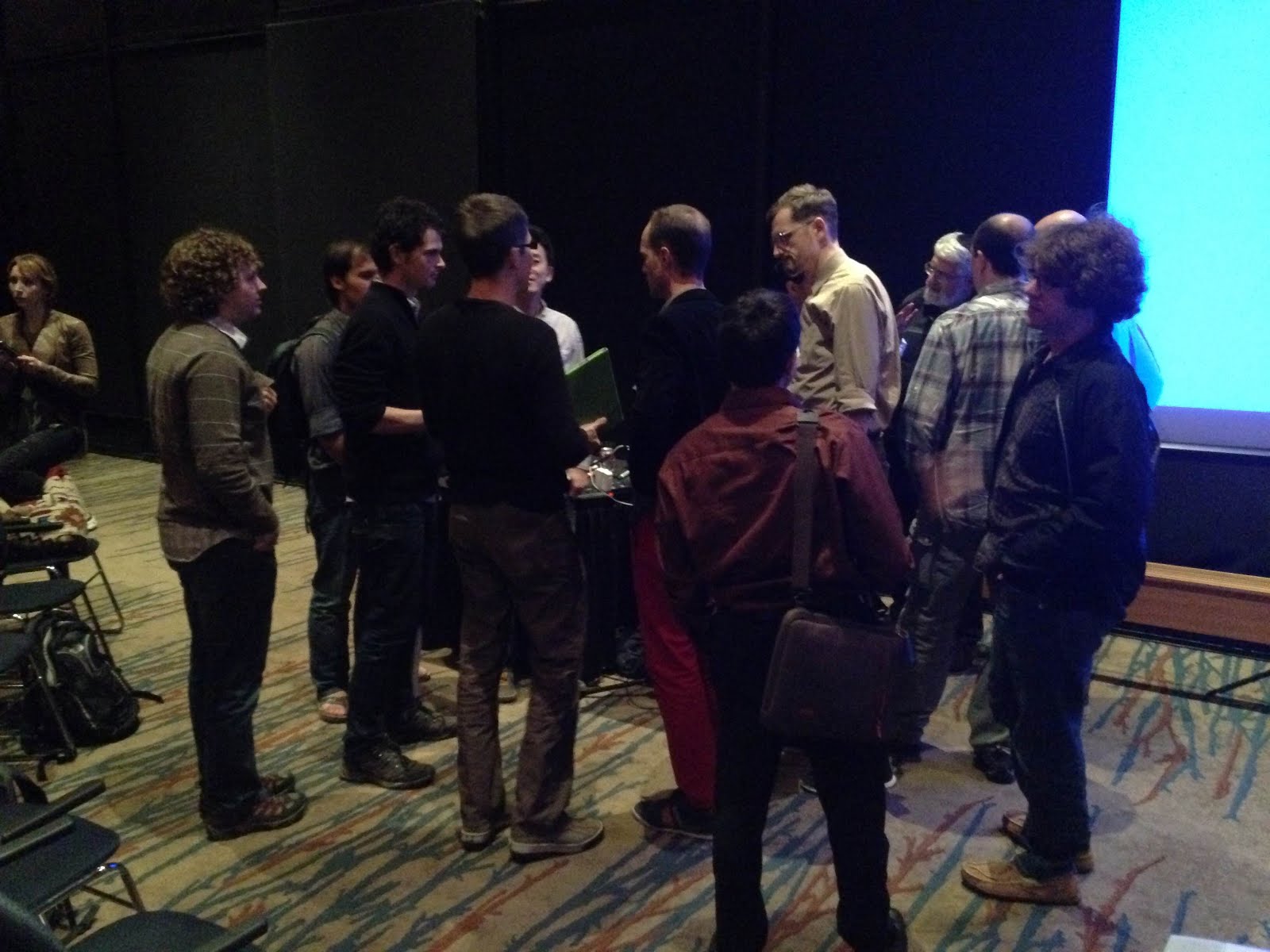 Konrad Körding – Big datasets of spike data: why it is coming and why it is useful

Konrad started off the workshop by posing some philosophical questions about how big data might change the way we do science. He argued that neuroscience is rife with theories (for instance, how uncertainty is represented in the brain) that, while supported by some data, are plausible only for particular areas or computations. Konrad argued that this may simply be the state of affairs for the brain, where complexity and heterogeneity are the rule. Rather than reject such theories as incomplete, perhaps we should be humble about our theories. Broad, overarching principles may only ever explain a small percentage of the overall variance in the brain.

In the second part of his talk, Konrad discussed his recent work in using Fisher information to build a unifying theory of large-scale neural recording techniques [Cybulski et al. 2014]. For example, it can be used to find the best distribution of electrodes in neural tissue.

Neuroscience will need new software tools to handle the very large-scale data produced by large-scale experiments (in both time and # neurons). Luckily, as Jeremy Freeman observed, neuroscience can lean on many tools already developed by the tech industry to deal with “big data”. One such tool is Map-Reduce: a framework for massive parallelization often used in web search and elsewhere. Jeremey introduced a software framework called Spark that provides a more abstract interface more suitable for iterative calculations that are often required in neuroscience. Jeremy advocates Spark for the use in large-scale data analysis, and is actively developing a software package called Thunder that implements many common data analysis tools such as PCA, ICA, and regression on top of Spark. For a 0.1TB dataset from whole-brain larval zebrafish recordings [Ahrens 2013], his algorithms run in the order of minutes using 30 machines. He proposed using legacy software systems such as MATLAB to convert any legacy data to a simple common data format (rows of time series) before feeding into Thunder.

What drives the temporal structure of a neural population response

: stimulus or (linear) dynamics? Mark proposed a method to answer this question by decomposing a time-by-neuron-by-condition data array with linear combination of small number of either R-sheets (condition-by-time) or D-sheets (neuron-by-time). If

is linearly driven by  stimulus through tuning curve

, a fixed number R-sheets will approximate the neural response well, no matter how long the recordings are. On the other hand, if dynamics drive the neural activity well, e.g.,

, then a fixed number of D-sheets will continue to explain the data well. Hence, he argued, the decay in low-rank approximation performance as more time is included gives insight into the fundamental driver of neural response: dynamics or stimulus. He showed evidence that in the motor cortex, dynamics alone explains the data better.

Linear dimensionality reduction is a common tool in statistics, data analysis, and many other fields. This term includes tools such as PCA, LDA and CCA. Standard practice in the use of these techniques is to perform an eigendecomposition of some matrix, and then truncate some of its eigenvalues. However, John points out that this common practice often does not maximize the objective function associated with a given technique. Only in the case of PCA is it provably optimal for minimizing

Rob Kass dealt with the problem of identifying excess synchrony, or discovering connectivity structure from data [Kelly & Kass 2012]. He took advantage of the fact that the number of interactions increases quadratically as the number of neurons increased–he could reliably estimate the alternate hypothesis of the connection strength (or synchrony) using Bayesian control of false discovery. Basically, the estimated distribution of connectivity resulting from point process regression was modeled as a mixture of theoretical null hypothesis and samples from the alternative hypothesis. He also included covariates such as population level oscillation (via population rate) in his model.

Latent-variable dynamical models are an increasingly popular tool for large-scale neural population analysis. A popular technique under this framework is to assume that spikes are Poisson-distributed with rates given by some function of a linearly-evolving latent state. While this technique is closely related to traditional Kalman filtering algorithms, the Poisson likelihood renders them difficult to compute. Lars presented a new technique for performing approximate inference under the Poisson observation model, as well a new technique for clustering neural populations with the same dynamics.

Matteo Carandini – Soloists and choristers in a cortical population

Matteo started by emphasizing that many widely-used models of neural data do not scale well with the number of parameters, and often do not have a clear biological interpretation. He then considered the raster marginal model of [Okun et al. 2012], a class models designed to be consistent with two measurements: (1) the marginal firing rate for each neuron, and (2) the population rate distribution (the number of neurons firing in each time bin). He showed that while many neurons in the population are choristers (are highly correlated with the population rate), a few are soloists. Soloists and choristers are indistinguishable, except that choristers are more “enthusiastic” (respond with an elevated firing rate in response to stimuli). The raster marginal model cannot distinguish between soloists and choristers, and so Matteo proposed an extension that includes a new statistic: (3) the correlation between each neuron and the population rate. His final model, including statistics (1), (2), and (3), has at most 3N parameters (where N is the number of neurons). This model captures the distinction between soloists and choristers, as well as correlation coefficients and connection probability. Matteo suggested using this model as a null hypothesis. If the model explains a potentially interesting phenomenon — perhaps it is not an interesting phenomenon after all.

I. Memming Park – Scaling up with Bayes

(Unfortunately, Matthias Bethge couldn’t make it, so Memming gave a talk instead.)
To make inferences with high-dimensional data, we need strong assumptions. In Bayesian statistics, we encode our assumptions and prior knowledges into the prior distribution. In this talk, Memming showed how to use popular parametric models of spike word distributions, and use Bayesian nonparametrics techniques to make them flexible.

Surya Ganguli – What are the right questions, and how many neurons do we need to answer them?

Surya’s talk introduced a new quantity, called “task complexity”, which bounds the dimensionality of neural population dynamics. This talk built on the talk given by Perian Gao’s given in the main meeting. Task complexity is an upper bound of trial-averaged neural response, characterized by the degree of freedom in the task conditions and correlation time scale of neural responses (there were hot discussions concerning whether  if “task complexity” is a misleading notion, since it includes the smoothness of the neural trajectory for the task). Surya claimed that the task complexities of many of the experiments are such that it is not surprising to recover low-dimensional dynamics from observations from 100 neurons in motor cortex. He emphasized that we need to design experiments with higher task complexity to take advantage of high-dimensional neural data. Surya also suggested that we may not need to observe many neurons to recover the dynamics, under certain conditions provided by the theory of random projections.